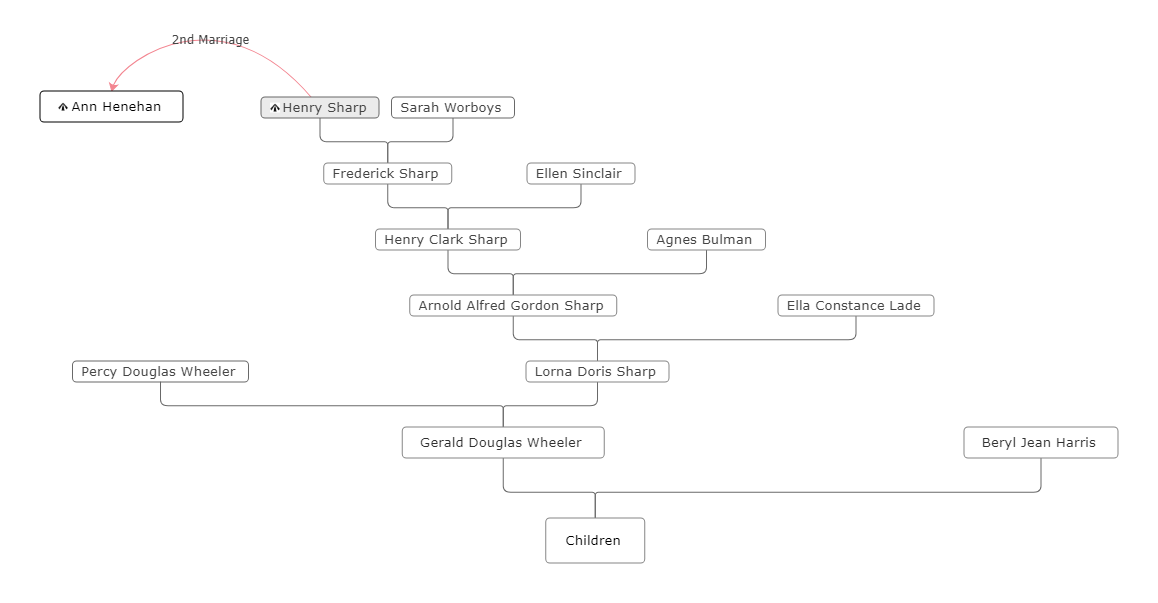 Growing up in Newton, Cambridgeshire, England, Henry fell into a life of petty crime with his friend William Jude.

Marrying Sarah Warboys in 1833 and having children did not put a stop to Henry’s thieving. In 1837 the local court system finally had enough and sentenced both, Harry and William, to a life sentence of transportation to Van Dieman’s Land on the opposite side of the world.

One condition of his sentence was that he was not allowed to return to England.

Henry’s misdemeanors did not abate once he landed in Tasmania, he would still find himself in and out of trouble right up to his pardon which was recinded only 3 days later for stealing mutton.

Henry finally turned a corner and was granted a conditional pardon in 1847. He was able to set himself up in the Parish of Honeywood, located just up the Kermandie River from present-day Geeveston in the south of the state and became one of the early pioneers of the area.

1847 also saw Sarah and their children, Ann and Frederick travelling out from England to join Henry, with another son, William being born the following year.

Somewhere between 1851 and 1854, Sarah died, and Henry remarried to Ann Henahan in 1854. (Locating any information on Sarah has proved elusive.)

During his years living in Honeywood and later Lightwood Bottom (Geeveston) Henry worked as a farmer primarily producing Apples.

As an old man, Henry, while living on his own, received serious burns after his clothes caught fire while tending his fire, unfortunately, Henry did not regain his health and succumbed to his injuries 9 days later.

Baptised on the 24th of June 1810, Henry was born to Samuel Sharp (a labourer) and Catherine Rayner in Newton, Cambridgeshire, England.

While John and Joseph appear to have remained in England, Susan migrated to Tasmania with her husband William Geeves and Thomas migrated to NSW, Australia.

Henry Sharp and William Jude, by the Rev. William Metcalfe, charged with feloniously stealing a fishing net at Newton, the property of Mr. Henry Headley, of Stapleford.

The 1st of Sep 1833 saw Henry and Sarah Warboys apply for marriage in Sarah’s home Parish of Foxton, Cambridgeshire, England.

1833: Henry and Sarah are officially married (by Banns)4

By me Jos. W. Berry, Sequestrator

This Marriage was solemnized between us, Henry Sharpe (of Newton) and Sarah Warboys (of Foxton), in the presence of Joseph Cooper and Catherine Warboys*.

To be sold by Auction

Lot 64. A new built double tenement, as now tenanted by William Jude and Henry Sharp, with a piece of land adjoining, containing 0a, 2r, 0p, in Whiteditch, in Newton.

Henry and Sarah’s first child Ann is baptised on the 27th of Jul 1834 in Foxton, Cambridgeshire, England.

The Commission of assize for this county will be opened on Wednesday evening next, before the Rt. Hon. Chief Baron Lord Abinger and the Hon. John Vaughan.

The business on the criminal side will be very heavy, there being already twenty-nine prisoners for trial, several of the cases of a serious nature.

1835: Henry receives one week’s hard labour for stealing half a loaf of bread8

The following cases were tried on this day in addition to those given in our last.

Henry Sharp (23), of Newton, was convicted of stealing part of a loaf of bread, the property of Mr. Wm. Long, of Harston.

I have yet to locate Fredericks birth\baptism record; however, he does appear on the 1841 Foxton Census along with his mother Sarah and sister Ann where his age was listed as 5 years old.

1837: Henry and William Jade are convicted for theft10

The prosecutor stated, that he went to a public-house, called the Three Horse-Shoes, at Harston, for a bill which the landlord, who is a blacksmith, had made for him; the prisoners were present when he took the bill; prosecutor afterwards went to the Swan public-house and left the bill there, and went out; when he returned he found the bill was removed, and having been told that the prisoners had been there, he immediately went out and overtook them; Jude had the bill, and as soon as he saw prosecutor he gave it to Sharpe, who afterwards dropped it, and prosecutor picked it up, saying they ought to be ashamed of themselves to rob a poor man of his bill.

Stearn, the landlord of the Three Horse shoes, corroborated the evidence of the prosecutor.

Mary Holmes, the servant at the Swan, said the two prisoners came in directly after the prosecutor went out, and she saw Jude take the bill, and he and Sharpe go out together.

Guilty.  Mr Orridge having been called to prove a previous conviction, they were sentenced to be transported for life.

1837: Henry and William are transferred to Gosport11

On Monday last three male convicts were removed from The Castle to the York hulk at Gosport, viz William Jude and Henry Sharpe, to be transported for life.

*Age was taken in the year of Henry’s transportation.
**Sarah and Susanne are possibly the same person, and his wife Sarah, Ann is his daughter.

11th of Nov 1839 at New Norfolk, Henry was brought before the Bench, for being “drunk and insolent to District Constable Smith”. Henry was sentenced to “six months hard labour in chains and return to his service”.

Lieutenant Governor’s decision of 15 Nov 1839, Henry was transferred into the “Town Surveyor’s chain gang” and on completion of this six-month stretch he was returned to service”.

A short notion to say the Henry was residing at the Prisoners Barracks in Hobart.

Henry received his Ticket of Leave on the 9 Dec 1845, but two days later at Anthill Ponds was found guilty of “gross misconduct in having in his possession a quantity of freshly killed mutton, representing himself as free and resisting the constables”. This occasioned him to a sentence of six months of hard labour. The Lieutenant Governor’s decision of the 19 Dec 1845 was that Henry serves his sentence at Antill Ponds.

Henry is recorded as having his Ticket of Leave.

1847: Henry is recommended for a Condional Pardon18

It was accepted that Convicts could make an application to have their spouse and children brought out to Van Dieman’s Land to join them.

Unfortunately, I have been unable to find an application. I have however sourced the passenger list for the Asia which arrived in 1847 with a Mary, Frances and Frederick sharp onboard.

I am confident that this is actually Sarah, Ann and Frederick who sailed out from England to join Henry.

Sarah gave birth to a son on the 21st of Jul 1848 in Hobart, the childs name is not recorded on the birth record and I’m yet to find a baptism record for him. However it is widely recognised the child’s name was William.

It is hereby notified, that His Excellency has received a despatch from the right honourable the secretary of the state, conveying her Majesty’s approval of pardons, upon the condition that they shall not return or be found within the countries in which they were severally convicted, or the united kingdom of Great Britain and Ireland during the remaining term of their transportation.

Deed of land grant23, 30 Acres located at Honeywood on the Kermandie River.

In the Supreme Court and be it remembered that on the Twenty third day of June, One thousand, Eight hundred and fifty of Van Dieman’s Land, one George Turnbull Clerk in the Office of the Collector of Pastoral Revenue at Hobart Town brought into this court a certain Deed Poll or Grant under the Public Seal of Van Dieman’s Land and it’s dependencies to be therein enrolled and recorded the [..] of which said Deed Poll or Grant is as follows (that is to say);

Victoria, by the Grace of God of the United Kingdom of Great Britain and Ireland, Queen Defender of the Faith.

To all to whom these presents shall come Greeting.

KNOW YE, that we in consideration of the sum of Thirty Pounds to us duly paid have given and granted and do by these presents for Ourself Our Heirs and Successors give and grant Henry Sharpe and his heirs ALL THOSE thirty acres of land situate and being in the Parish of Honeywood in the County of Kent in Our Island of Van Dieman’s Land and bounded as follows (that is to say);

Together with the appurtenances EXCEPTING all mines of gold and silver AND SAVING AND RESERVING ALWAYS the right of making and constructing upon said land from time to time such and so many roads and Bridges for the use of Us and Our subjects of such convenient width and form as may by Us or Our Successors be deemed expedient. AND ALSO the right of improving and repairing the same and of digging for and using for those and other public purposes all such and such quantities of indigenous timber, stone, gravel and soils may from time to time be required together with full liberty of ingress, egress and regress with servants and workman and those with horses cattle and carriages for the purposes aforesaid and of working all such mines and taking and carrying away the produce thereof and of cutting, quarrying and conveying as and where it may be deemed necessary all such timber, stone, gravel and soil respectively.

TO HAVE AND TO HOLD the said Thirty acres of land with their appurtenances (excepting always and saving and reserving as aforesaid) unto and to the use of the said Henry Sharpe, his heirs and assigns forever the same in free and common soccage tenure of Us, Our Heirs and Successors to beholden YIELDING AND PAYING therefore yearly unto US, Our Heirs and Successors the Quit-rent of one pepper-corn if the same shall be demanded.

IN TESTIMONY WHEREOF, We have caused these Our Letters to be made Patent and the Seal of Our said Island of Van Dieman’s Land and it’s dependencies to be hereunto affixed.

WITNESS, Our trusty and well-beloved Sir William Thomas Denison Knight, Our Lieutenant-Governor of the Island of Van Dieman’s Land and it’s Dependencies at Hobart Town in the said Island the Eighteenth day of February in the Thirteenth year of Our Reign.

*Honeywood (pre 1900) was renamed to Geeveston.

Name: Henry Sharpe
Place: Lightwood Bottom, Kermandie River
Who is in charge: Henry Sharpe
Who is the occupier: Henry Sharpe
Stone, Brick or wood: Wood
Complete\Incomplete: Unfinished
Inhabited\Uninhabited: Inhabited
How many people: Six
How many are free: Five
How many were dwelling on the 1st day of Mar 1851: Six
What other persons on that night were dwelling with you: None

I cannot prove what became of Sarah as her death record has not been found yet.

I can only conclude that she died somewhere between 1851 when she is recorded on the 1851 census and 1854 when Henry remarried, stating that he was a widow.

*All references Paralexia refer to reduce reading ability due to brain damage. It may be that Ann died after having a stroke?

It appears that Mr. Sharp, who is almost helpless and nearly blind, and in the absence of his household, attempted to reach a piece of wood to place it on the fire. In doing so, he got too close to the fire, and the flames caught his coat, waistcoat, and shirt and burned his back terribly before assistance arrived.

The burns are more serious than were first anticipated, and little hope is now entertained for his recovery.

Dr. Anderson, of Franklin, is attending the sufferer

SHARP:- On April 3, at his late residence, Geeveston, Huon, Henry Sharp, a native of Newton, Cambridgeshire, England, in the 92nd year of his age. Sydney papers, please copy.

IT IS REQUESTED that ALL CLAIMS against the Estate of HENRY SHARP, late of Geeveston, in Tasmania, Farmer, deceased, be at once forwarded to the Executor, under cover, to CHARLES BALL, Franklin Chambers, Solicitor to the Estate.